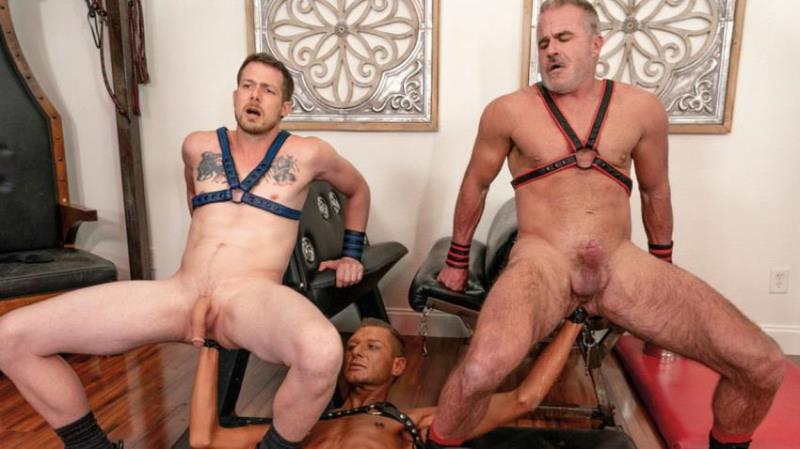 Alex Killian is bound in a strait jacket and blindfolded awaiting his fate. Leather studs Drew Savage and Wrex Wylde tease Alex with a flogger and stick. Dale releases Alex from his jacket and puts him on his knees so Alex can suck on both their growing cocks. They finally remove Alex's blindfold, and he and Dale bend over with their holes in front of Wrex. Wrex wastes no time starting to work his fists deep into the holes in front of him. One by one, Wrex's hands disappear deep into Alex and Dale's piggy holes. Switching positions, Wrex gets down under the pigs to let Alex and Dale sit on his fists. After both of their holes have been punched, Dale and Alex stand over Wrex and dump their loads in his face.

Aaron Summers' hands are twitching for sweet ass. He drags Billy Berlin over to the depot, rips off his regulation shorts and goes in to Billy's ass with a full fisted blitz! Billy rides Aaron's hand and arm forall its worth. Craving more, Aaron plows Billy's perfect ass with ourbiggest man-rammer dildo. But even that doesn't satisfy Billy. Aaron grabs one of our loaded shooters and stuffs it right up Billy's hole! Billy's eyes widen in waves of terror and pleasure. 'Oh FUCK!' Billy cries, 'Don't fuckin' shoot!!' The cold metal mouth of the rodshocks Billy's prostate into convulsions. Billy blows his molten load!

Over at the motor pool, Mason Garet tries to get our jeep ready before morning but can't keep his mind on his work with Ricky Sinz and Trey Casteel breathing heavy down his neck. Mason would rather get his own ass overhauled anyway. Ricky takes control, his foulmouth spitting orders in Mason's ear as Mason chows down on Trey's weaponry. Ricky puts Mason through all the paces, ordering him to fuck, suck, and open his ass wide. Trey and Ricky take turns working Mason's gaping hole till it stands at attention. Grease drips everywhere by the time they're done working Mason over to their sweaty satisfaction.

Element Eclipse's maniacally charming laugh bellows throughout the course of an intense electro play scene with a submissive Kurt Andrews. The juxtaposition of Element's laughter and Kurt's whimpering work in unison to create an atmosphere of heightened arousal. Element looms in front of Kurt's bound body and begins a game of playful suffering with his ultra violet wand, taunting the poor boy as he wallows in exquisite pain. After sucking on each other's throbbing tools, Element bends Andrews' over and introduces him to his electrical stick. The charged wand reels, overpowers and eventually burrows into Kurt's ass, taint and threshold. At the height of Kurt's rush of pain, Element switches from the jolts of the want to his energized, massive cock and he proceeds to pound Kurt violently in an effort to get a hot load out of Kurt, which he shoots onto his chest with Element's following shortly after.

Matched neck to neck in both ink and intensity, Doc Benway and Texas Johnny open the scene with a mix of tongue swapping, cock stroking and ass kicking. But these two aren't about beating ass with their muscle - they're about pounding it. A sweaty romp ensues with the boys swapping spit, shoving cock down throat and showing off prowess both chest and fist. Jabs, hammer fists and cross straight swinging are a returning theme of the scene and for good reason: these two gutter punks are fucking legit. They take their rallying to the couch where they get into an intense game of sounding rod plunging. Doc doesn't waste any time getting a rod into Texas's gaping piss slip. The tattooed pair sits side by side, cock to cock, matched in both chemistry and competition. Doc shoves a reel of steel down his slit and make the most of cock and couch. Bent over and ready to declare defeat, Texas Johnny gets it rough, loud and raunchy beside the sofa. Doc pounds him like a rabid dog, eats up the load he shoots on his ass and gives the runner up a load on his chest.

Josh West spies Lance Navarro stroking his fat uncut cock and goes down to investigate. He sucks Lance's monster and finds a butt-plug up his ass. Josh knows that Lance can take something much bigger and begins to work his hole with a series of huge toys. Finally Josh shoves his fists deep in Lance's hungry ass, prompting Lance to ride Josh's forearm to the elbow while Josh sucks his huge dick.

In the back of the 'Fist Bus', sexy Brit Drew Dixon has just shown his appreciation to hunky Brian Bonds for saving him from the elements on a snowy road outside Vegas. As they whiz down the highway, having a fist-fest on a leather bed behind tinted windows as clueless commuters and truckers pass by, Brian demonstrates true American hospitality to his impatient English friend. Drew can't wait to get his beautiful muscle ass manhandled by Brian's manly mitts, and as they get closer to city limits, the hungry cocksucking and ass-eating leads to the main event. Soon, Brian's hand is buried wrist deep in British booty. Slathered in J-Lube, Drew gets his prostate pounded till he shoots a giant load and Brian laps it up, as they both hit the jackpot in Sin City.