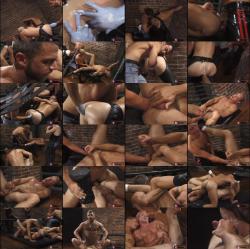 Up Your Alley Part 2 brings you back to the after-the-street-fair-sex-party and picks up with more fist-fucking-frenzy. Jeff Allen pries open Aaron Tanner's ass for Leif Gobo's camera, Michael Soldier fists Rik Jammer in the corner and Matthew Green puts down his camera to fist Sky Donovan on a fuck bench. Donovan writhes at the end of Green's fist, jerking off until he shoots a huge load all over himself and the floor behind him. Then Donovan turns the tables by throwing Green down and fucking him hard in the ass. But it isn't until Donovan puts his fist in his ass that Green comes. Next to pop is Jeff Allen who pulls out of Aaron Tanner and shoots his load across the room! Donovan and Green jump into the action while Allen fists Tanner until he gets his nut.